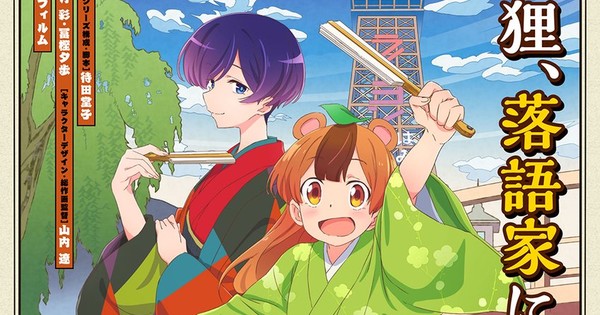 The anime will premiere in October on Tokyo-MX, MBS and B.S. Asahi.

The TV anime will feature:

The fantasy story is set in the Japanese Taishō era (1912–1926). He follows Mameda, a shapeshifter tanuki girl who dreams of becoming human. Mameda transforms her outward appearance into a pretty, raven-haired human girl and heads for the bustling city of Osaka. However, people instantly see through Mameda’s appearance, and a beautiful woman ruthlessly tells the despondent Mameda, “Go back where you came from.” It turns out that this woman named Bunko is herself a supernatural creature who turned into rakugo (comic storytelling) storyteller. Mameda begs Bunko to become his master and teach him how to play a human.

TNSK debuted in the manga Kodanshait is Good! Afternoon magazine in January 2019 and it is ongoing.

Sources: My master has no tail anime website, MoCA News