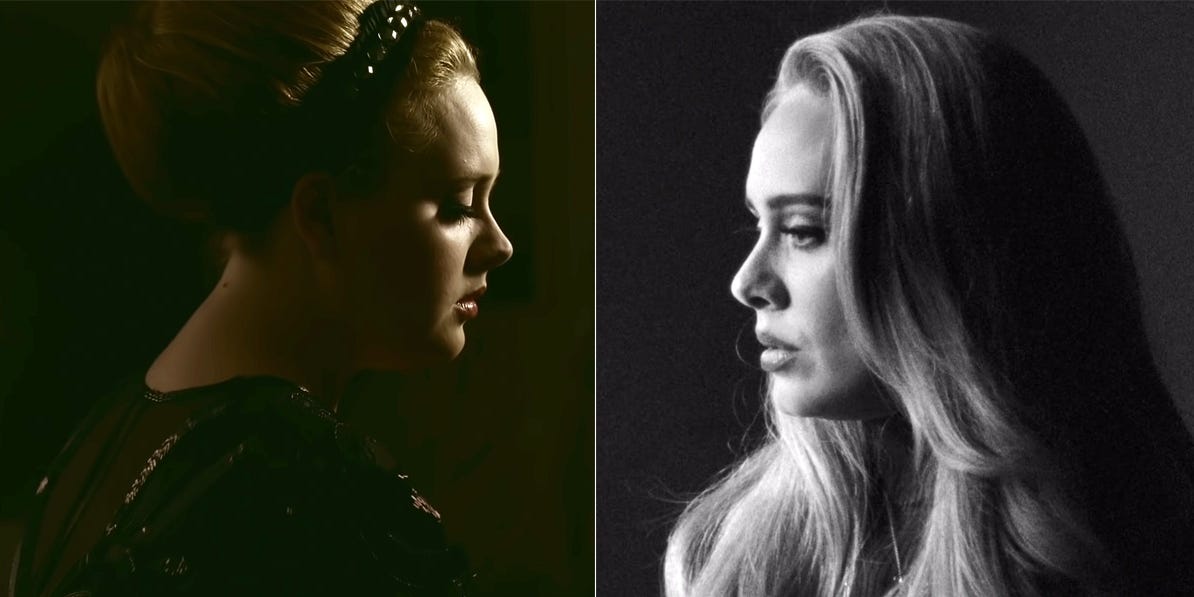 Music Video References You May Have Missed

Adele has finally released the music video for ‘Easy on Me’, her first new song in six years and the first single from her fourth album ’30’.

“Easy on Me” begins with black and white footage of Adele leaving an empty house, suitcase in hand.

“Hello” begins with Adele arriving at the same house. She is talking on her cell phone and asks the other person, “Can you hear me now?”

As Adele leaves the same house in “Easy on Me,” she answers a call on her cell phone: “Hello honey, how are you? Yeah, I’m fine, yeah, everything’s fine. All done, all is well packed, I’m just gonna hit the road now.”

She then mentions having a “bad signal” and the call begins to drop.

Most of the video shows Adele driving through the countryside. She meets several happy strangers along the way: a family celebrating the holidays in a roadside trailer; a couple driving past her in a convertible marked “just married”.

“Easy on Me” was inspired by Adele’s divorce from Simon Konecki, which was finalized earlier this year. She wrote the song in 2018, the same year they got married.

“We got married when I was 30…then I left,” she recently told British Vogue, declining to elaborate on the timeline. “It’s very embarrassing. It wasn’t very long.”

“It was the first song I wrote for the album, and then I didn’t write anything else for six months after that because I was like, ‘OK, well, I said it all.'” , she added.

As Adele reaches the second chorus of the music video, the black and white images suddenly switch to color. She is sitting in a room painted dark red, surrounded by antique furniture in rich brown and beige tones.

The scene is reminiscent of the music video for Adele’s hit “Rolling in the Deep,” which she wrote when she was around 21.

She described the heartbreaking anthem as a reaction to “being told that my life was going to be boring and lonely and boring, and that I was a weak person if I didn’t stay in the relationship. I was very insulted, and wrote it as a kind of “fuck you”.

In contrast, in the chorus of “Easy on Me”, Adele asks for empathy and patience as she tries to heal and confront the demons of her past.

She recently told Vogue that her upcoming album, due out November 19, will see her take more responsibility for her heartbreak.

“I realized I was the problem,” Adele said. “Because all the other albums are like, ‘You did this! You did that! Fuck you! Why can’t you come for me?’ Then I was like, ‘Oh shit, I’m the running theme, actually. Maybe that’s me!'”