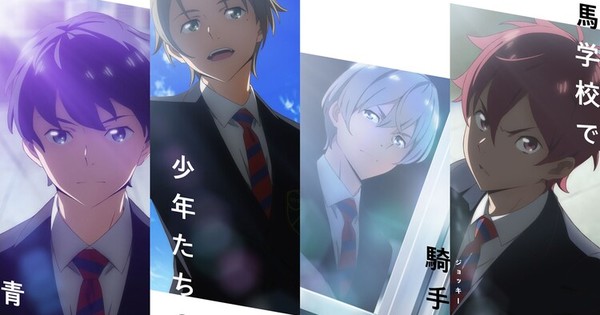 The official site of AniplexThe original television anime of teen marching band (Gunjo no Fanfare) revealed the artists for the show’s theme song on Tuesday. group of boys JO1 will perform the opening theme song “Move The Soul” and SawanoHiroyuki[nZk] with Junki Kono and Sho Yonashiro (both from JO1) will perform the ending theme song “Outsiders”. The anime team also unveiled a new visual.

The anime will premiere this spring and will stream on Tokyo-MX, BS11, Gunma TV, Tochigi-TVand MBS in Japan.

The stars of the anime: (from left to right in the image above)

The story takes place at a horse racing academy that trains boys to become jockeys. The three-year academy is highly competitive and those wishing to participate must not only pass an academic test, but also a physical and fitness test. Yū Arimura is a former popular idol who falls in love with horse racing after seeing it for the first time and wishes to join the academy. Shun Kazanami grew up on an island and only learned about horse racing through radio shows growing up. Amane comes from a high class family in England and her father is a former jockey. Amane has previously attended horse racing academies in various countries. The show follows these three 15-year-old boys and others at the academy.