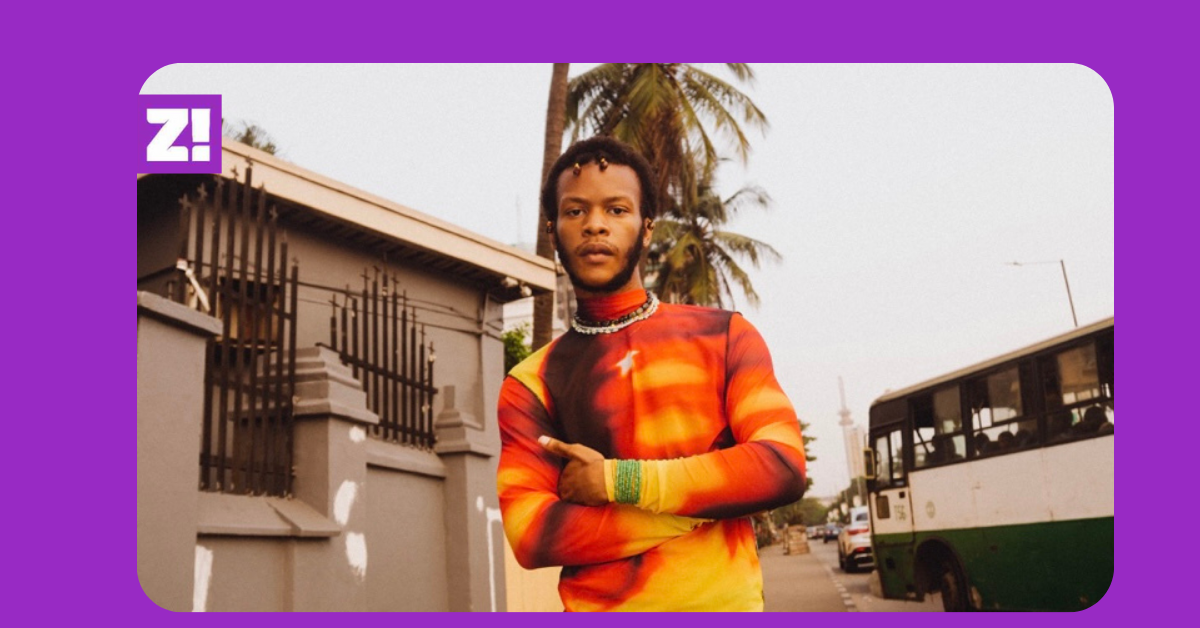 Creator Spotlight is a weekly series celebrating young Nigerians in the creative industry doing unique things. Everyone has a story, and Zikoko wants to tell it.

Hi, I’m Bryan Ibeh. I am in my second year at Unilag. I am a creative director and a self-taught experimental filmmaker. I’m also into photography, I do music sometimes, and I’m a model. I guess something weird about me is that I like nuts – peanuts, almonds and pistachios. My favorite place is the beach.

How did you start as a creative director?

I have always had an interest in the arts which my parents supported. My dad was an artist, so I grew up in an arts-friendly home. I had the support of my family in all my interests, from fashion to music. I didn’t know what I wanted to do until I was 16 when I started making movies and exploring my creative direction. I learned on my own every day and practiced constantly. Even though it looked like I was just playing, I made something out of it.

What was so important to you being 16?

I had just graduated from high school, so I completely reinvented myself, physically and spiritually. One thing that I discovered was the love of cinema. It came naturally. I would film birds, cars or people. I would think of a song that would go perfectly with it and make a video of it. I also met my best friend for three years now. She was just getting started in the underground music scene, so I gave her ideas for cover art direction, and then music video ideas. At the time, we were performing and making funny music videos and promotional visuals for her. It was my first experience of creative direction and experimentation.

Did you do them for free?

Yes, because it was a collaborative effort. I can’t even call it my job, per se. My friend and I would hang out. While they were playing their music, I had an idea for a video, and we would go out and shoot something. It happened organically. At the time, I didn’t think about the big picture. I was still discovering what my art should look like.

Would you consider your best friend your muse?

All my friends are my muses. But yes, she was one of the very first.

How would you describe your aesthetic?

I would say experimental, very avant-garde. I like to experiment with strange and abstract elements. I center my work on nature. For example, if I was making a music video, I would use exaggerated colors and weird lighting to create an otherworldly experience.

I recently released a fashion film on NATAAL Media called “We are looking for each other”. It’s an experimental film and a great representation of my work. Recently, I worked with a talented artist named Julrity, on the visuals for her single “BahtShit”. I’ve done other things with more contemporary underground talent in Lagos.

Who else have you worked with?

I recently worked with another creative director and stylist, Seun Odebunmi, on a project called “Villain Identity”. This was an editorial photo shoot for which I colored and edited. I also worked on another experimental music video with another upcoming artist, Snt Rei, and created experimental and meditative films for a showcase I did last year called Expo Lagos.

What do you study at school ? Does it influence what you do?

How to reconcile the school with all that?

I didn’t have to juggle a lot because the universe worked in my favor. Earlier this year, I had a nine-to-five in the creative industry, and ASUU went on strike, so that was perfect. After I left to focus on freelancing in July, ASUU was still on strike. Now that school is back, my parents keep telling me that I can combine my work with school. It would definitely be a challenge, but I’m too involved now, so I have no choice. Once on a trajectory, you have to keep climbing to establish yourself.

What was it like growing up in a family of artists?

My dad was an R&B artist. I like to live my life apart from that fact, but it was cool and fun growing up. We went to award shows, fashion shows, concerts and music video shoots. My first time on my father’s music video set, I was four or five years old. While I wasn’t there, my older sister was.

So you always had a video camera to play with?

I wish. Sounds like a better story, but my dad was a musician, so it was mostly about music. It encouraged my interest in art, and I thought I would be a musician for a while, but now it’s just one of the many things I do. My parents supported me a lot.

I’m independent, so I don’t ask my parents for a lot of help. Their support is above all moral. They understand that I’m an adult and are more forgiving about things that can come with this line of work, especially when it comes to fashion. They also offer advice on the business side of my career.

Who are your biggest cinematic influences?

I have no influence. I like a lot of different films and my work comes from many places, but I never felt like anyone was influencing my work. My life experience influences the work I do.

What about the people you would like to work with?

I would like to work with Rema, SOLIS, Odunsi and Obongjayar. When I listen to a song, and the song is good, I start to conceptualize. SOLIS is one of those musicians for me. I remember watching the video for her first single in the wake and thinking about what a great video we could have done for that song. With Odunsi, wanted you is one of my favorite songs. I would have liked to be able to work on the clip with him.

With music videos, I usually would pick out the themes of the song and describe what the general idea of ​​the story would be. But with cinema, I am very experimental. I compose anything that looks visually appealing and explore it as much as possible.

How long does it take you to create a film?

It depends on the project itself and what it contains. The fashion movie I released recently was shot about two months ago but came out three weeks ago.

How much do you spend for a set?

The only thing about being a freelance creative is that you can handle yourself. Some sets are very autonomous. Everyone contributes to production in some way. If it’s the clothes, they might belong to a friend. The model can be a collaborator, but sometimes I pay models, rent lights and possibly a camera. You have to bring a team because production is a bunch of moving parts. Some projects are more profitable than others. The “Bahtshit” music video was probably the most expensive production I did, but I can’t divulge the amount.

What do you do when you’re not conceptualizing video ideas?

I listen a lot of music. I love making beads in my spare time. I like to do my hair and do people’s hair. I like to hang out with my friends; I go to a lot of EDM raves.

What is your favorite career moment?

This must be my first exhibition – Expo Lagos. It was this immersive experience where the art was projected onto the walls. It’s my favorite because it was the first place I got to show my work, and it was the perfect place because my work is centered around color and psychedelia. It was a match made in heaven.

What do you like best about the work you do?

It is having an idea, imagining it producing a desired effect and watching it happen. While working on the fashion film, there were scenes and sequences that I wanted so uncomfortable, almost unbearable, to watch because it was weird. The public reacted as I had imagined at those times. Experiencing that is the most exciting thing about being a filmmaker or creative director.

What are your plans for the next two years?

Have you had comments about your work that have stuck?

A friend I respect said he had never seen a talent like mine. It touched me because he is someone I am constantly with. It’s easy to think of something a friend does as ordinary when you’ve witnessed it a few times. He saw me put together a video and said he felt very proud. Creative direction is something I started doing for fun on my own, so I appreciate it when people compliment my dedication. It’s my life, and I hope my commitment to it shows.