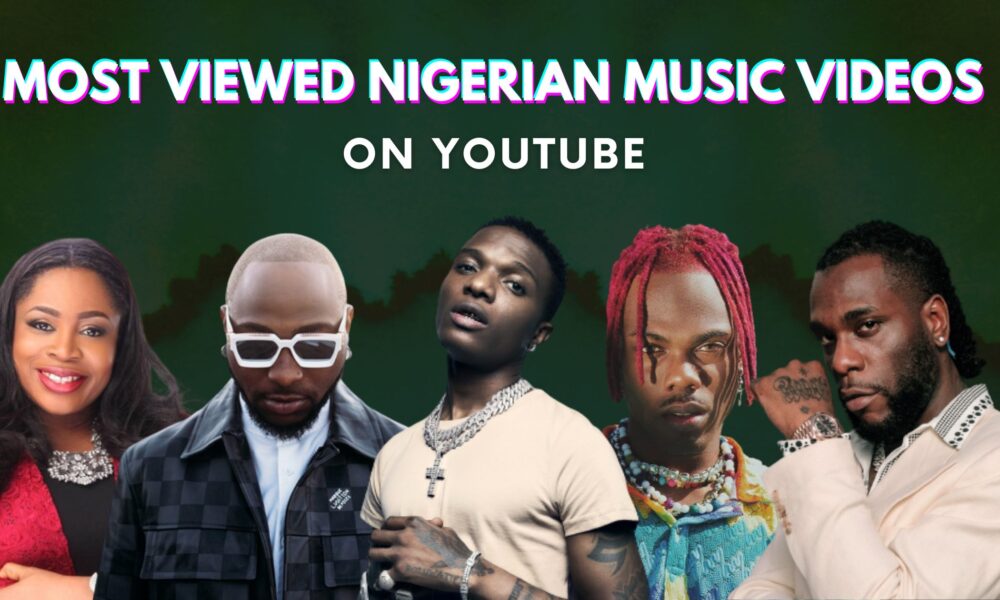 Nigeria is known for two things worldwide, crude oil and Wizkid, ehm, sorry Afrobeat. As I’ve said in over 10,000 of my articles, “Afrobeat is without a doubt one of the biggest genres of music in the world right now.” How can we verify the factuality of this statement, Number!, Yeah, you heard me right. Our only claim to Afrobeat competing with the biggest genre in the world such as pop, rap and country music is to have similar numbers of people with music and streaming platforms. In order to put Afrobeat numbers in the spotlight, I have compiled a list of the 10 most watched Nigerian music videos on YouTube.

CKay ft Joeboy & Kuami Eugene’s Love Nwantiti remix is ​​the most watched Nigerian music video on Youtube, with over 299 million views. Love Nwantiti is undoubtedly one of the greatest African songs of all time, it is the best-selling African song, with over 10 million units sold worldwide. It is also the most streamed Nigerian song on Spotify with over 500 million streams. Cut History Short Ckay love Nwantiti has many records to her credit, one of which might not be broken any time soon.

On the bottom of the African giant, Burna boy takes second place among the top 10 most viewed Nigerian music videos on YouTube with over 285 million views. The track is one of the best-selling Nigerian tracks of all time, with over a million units sold. It is certified Silver in the UK, Gold in the US, Platinum in Canada and Diamond in Farace.

Multi-award winning singer Davido joins the list with his 2017 single “Fall”. The song with over 246 million views ranks third among the most watched Nigerian music videos on Youtube. Fall is the first Nigerian song to be certified Gold in the United States and Canada, having sold over 500,000 units respectively. It was the longest running Nigerian pop song of Billboard the story, before Wizkid’s “Essence”

Sinach is one of the singers putting Nigeria on the map, without much media attention. She released Way Maker, a contemporary worship song on 30 December 2015. The track achieved commercial success in Nigeria and outside, racking up over 207 million views on Youtube. With the song, Sinach became the first African artist to top the Billboard Christian Songwriters chart in May 2020. The track won the Dove Award for Song of the Year at the 51st GMA Dove Awards and BMI Song from the year.

This list cannot be complete without the GOAT of Afrobeat, Ayodeji Ibrahim Balogun, popularly known as Wizkid. The singer’s 2019 hit song, Joro, with over 204 million views, ranks fifth among the most viewed Nigerian music videos on Youtube. The song caused a stir on the video-sharing platform and became an international hit with over 70 million streams on Spotify. It is certified Gold in Canada.

CKay returns to the list with the acoustic version of Love Nwantiti. The global hit song has racked up over 202 million views, taking its place among the most watched Nigerian music videos on Youtube. The song has sold over 2.560 million certified units in 15 different countries, including the United States, United Kingdom, and Canada. It peaked at number 3 on the UK Singles Chart, number 26 on the US Billboard Hot 100, number 2 on the Billboard Global 200 and number 5 on the Canadian Hot 100.

Burna Boy’s Ye, with over 200 million views, ranks seventh among the most watched Nigerian music videos on Youtube. The song was released on August 6, 2018, as the sixth single from her third studio album Outside. It peaked at numbers 26 and 31 on Billboard’s Mainstream R&B/Hip-Hop and R&B/Hip-Hop Airplay. The song sold 1.40 million certified units and received 4 gold certifications in four different countries, including the United States and Canada.

Tekno’s continental hit Pana is one of the most watched Nigerian music videos on Youtube with over 183 million views. The song was released on July 22, 2016, it received mostly positive reviews from music critics and topped MTV Base’s Hottest Track of 2016 at number 2. “Pana” won the award for Song of the Year at the 2016 Soundcity MVP Awards Festival and was nominated at the 2017 Nigeria Entertainment Awards for Best Single of the Year.

Another Davido hit of 2017 “If” with over 154 million views on Youtube joins the list of most viewed music videos on Youtube. The song was released on February 17, 2017 as the lead single from the second studio album A Good Time (2019). It won Best Pop Single and Song of the Year at the 2018 Headies and was certified Gold in the United States and Diamond in South Africa, totaling 700,000 units certified worldwide.

Reason With Me by Rudeboy, with over 152 million tracks, concludes the list of the most viewed music videos on Youtube. The song was released in 2019, after P-Square disbanded in 2017, and both band members have been pursuing separate music careers. Rudeboy released his first solo tracks titled “Fire Fire” and “Nkenji Keke” in 2017. “Reason With Me” generated the highest views on YouTube in Africa in 2019.

For the sake of optimization and enhancement, here is a summary of the 10 most viewed Nigerian music videos on YouTube.

QUEEN OF SABA ! Mr. Hyena baits a naive girl with music videos and gets a miracle

Are music videos worth it for independent musicians?